Hopefully by now the many fans of Porter Robinson have caught on to his side project Virtual Self. The self-titled EP was released in November 2017 and has ignited the dance music scene with early 2000’s rave nostalgia. Almost every track has received remixes, and new artists are emerging who seem to have been inspired directly by Virtual Self. Today, Porter Robinson has released the official video for arguably the most popular track off the EP, ‘Ghost Voices’.

The video for ‘Ghost Voices’ sees Virtual Self lore come to life as we witness the physical awakening of the project’s leading characters, named Pathselector and technic_Angel. These characters seem to be the dual artificially intelligent (AI) egos of Porter Robinson’s ‘virtual self’. They even have their own Twitter accounts which were used to promote the project initially.

My favorite part about this video release is the inclusion of the two Virtual Self AIs in the YouTube comments. Porter Robinson (or whoever moderates Pathselector and technic_Angel’s YouTube accounts) chose to do a sort of AMA for fans; the AIs basically invited fans to ask them anything. The AIs mainly chose to answer questions related to their identity and purpose. For example, the AI’s revealed that they are each responsible for the creation of specific songs:

I found this to be extremely interesting and I look forward to seeing how these separate entities reveal themselves musically in future works.

Other comments made by the dual AIs were more cryptic and hinted at a larger lore being created: 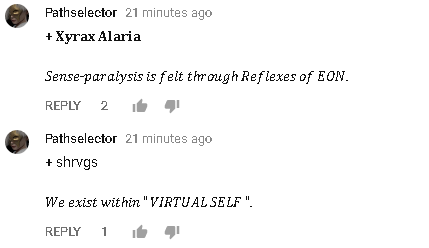 These are all terms and phrases that have been mentioned sporadically across Virtual Self’s social media and songs (and there’s much more not mentioned here). Porter Robinson is clearly trying his hand in some serious world-building with his Virtual Self project. It will be cool to see how the pieces fit together as Virtual Self’s multimedia catalog grows.