In 2018 I challenged myself as a music fan to really think about which albums I thought were the best of the best. Ranked from favorite to most favorite, below is a list of EDM albums that I felt demonstrated true artistry and left me listening to them on repeat.

Released on February 16th, Ultraviolet was the first album of the year that I fell in love with. Ultraviolet is actually Justin David Blau’s (3LAU) debut album, and it is masterful. After years of remixes and anthemic originals, 3LAU was able to pull his vision together into a diverse and emotionally substantial dance album. As an EDM producer and DJ, it’s probably hard to convince people that your work is something more meaningful than the superficial festival bangers that are churned out every day, but 3LAU proved that true artistry can be found in dance music.

Ultraviolet is melodic, diverse, and heavy on the female vocal features. Some of these incredible features include Nevve, Neonheart, Emma Hewitt, and Carly Paige. Unique and memorable melodies range from bouncy dance tunes to glitchy electro-house music. The combination makes for an ethereal and engaging listen from front to back. Living up to its name, Ultraviolet evokes a colorful blend of both masculine and feminine energies.

My personal favorite songs on the album are ‘Touch’, ‘Fire’, and ‘On My Own’. The former leads with a perfect example of how 3LAU’s strange sound design hooks the listener from the get-go. Carly Paige’s vocals meld perfectly into a sparkling drop that includes that same unique lead. ‘Fire’ is the glitchiest track on the album, featuring powerful vocals from Neonheart and co-production from Said The Sky, and is possibly the most danceable. Finally, ‘On My Own’ features my favorite vocal performance by Nevve, backed by a glittery, 80’s-esque dance track.

One of the coolest aspects of 3LAU’s debut album is that for every dollar earned, the artist is donating to the cancer prevention organization Fuck Cancer. The donation is curated through 3LAU’s not-for-profit record label BLUME. So every time you listen to Ultraviolet you are effectively helping the fight against cancer.

The extremely talented Alexandra Scholler, more popularly known as Alison Wonderland, released her sophomore album Awake at the beginning of April. Awake takes listeners further into Scholler’s past experiences with depression and being a victim of abuse, while also offering fun tracks to throw down to on the dance floor. Scholler has proven her expert artistry with this release and has become an important example of women breaking barriers in the male-dominated EDM scene.

Appropriately so, Scholler introduces her album with a powerful performance using her favorite instrument, the cello. From there, the listener is led down a rabbit hole of Pop-influenced proclamations of love backed by synthy bass breakdowns. Songs like ‘Easy’ and ‘Cry’ are confessions to how difficult Scholler sometimes is to be around, while ‘Church’ is a call-to-action against the emotional abuse commonly inflicted in relationships (I did a write-up for this song upon its release). ‘Happy Place’ is meant for the true fans and is the anthem to the culture surrounding Alison Wonderland’s persona. The dirtiest tracks on the album are ‘Here 4 U’, ‘Good Girls Bad Boys’, and ‘Sometimes Love’, the latter featuring my favorite Australian duo Slumberjack. My all-time favorite song on the album is ‘High’ (featuring emo rapper Trippie Redd), which is a psychedelic tribute to the stoners and also one of the most experimental tracks Scholler has ever released.

If anyone were to ask me what the most diverse album was in 2018, I would undoubtedly answer with Visceral, the latest and most mature album from the artist Tanner Petulla, a.k.a. Getter. The California native has had a history of creative projects both inside and outside of EDM. His versatility as an artist is reflected musically in his new album.

Visceral plays out like an experiment in the various sounds of EDM. It’s hard to classify each individual song, as they are all unique in their own right. Getter keeps his distance from many of the usual EDM tropes that even he is guilty of using in some of his earlier music. Instead, he takes more of an artistic approach to sound design and melody, not catering to the festival banger formula but towards something more… visceral.

One of the greatest aspects to this album is the vocal features, which include a diverse group of up-and-comers that have made waves in their own respective musical niches. Getter even tries his own hand in singing in the songs ‘Colorblind’ and ‘Made For You’, and these definitely come out as the rawest on the album.

In most albums, I’m able to pinpoint my favorite songs, but on Visceral this is hard, as each one plays out as a specially tailored single. There doesn’t really seem to be a running theme or story-like thread connecting each song. Visceral is more of a showcase of Getter’s versatility and ability to imbue emotion into melodies.

Straight from the psychedelic depths of the techno-utopia, G Jones presented the world with his latest album The Ineffable Truth in October. The title of the album itself hints at something esoteric and magical that the world may or may not be ready for. With this release, G Jones has indeed proven to be the forward-thinking producer that his professional peers tout him to be.

The Ineffable Truth is a kaleidoscope of sounds that are at the same time familiar and alien to us denizens of the seemingly futuristic 21st century. A typical track will go from a long string of technological sounds to sudden bass drops fit for any large-scale venue. While mostly chaotic and energetic, the album has many serene moments allowing for a quick breath and some reflection. The chaotic/peaceful duality is arguably what makes this album so masterful. It is somehow telling the story of human civilization with its oscillation between war and peace; life, death, and rebirth. One of the most beautiful examples of this is my favorite song ‘Time’, a two-part masterpiece which begins with a glitchy cacophony of robotic sounds and ends with a majestic burst of high-flying synths that remind me of escaping Earth’s atmosphere into space; all the while, Asian-style wind instruments flutter in the background.

The psychedelic nature of the album presents itself pretty blatantly through a couple samples of a man being interviewed while on hallucinogenics. These interviews paired with the melodies directly before and after the samples set the stage for one of the running themes within the album: nature and our perception of reality. Anyone familiar with the psychedelic experience brought forth by hallucinogens will feel as though this album is a quick summation of such a journey. I’ve listened to this album several times and still feel like there is more to be discovered with more listens. 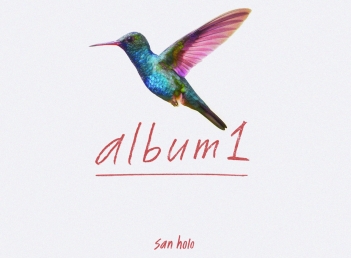 Dropped in mid-September, album1 is the soaring debut album from Sander van Dijck, a.k.a. San Holo. Like a message sent from heaven, album1 is an uplifting sonic experience that feels like flying in a dream. San Holo uses a combination of atmospheric melodies and chilled out vocal features to deliver one of the most emotionally substantial albums I heard all year. Anyone who’s familiar with San Holo’s previous work will feel right at home in album1, which plays heavily around his notorious guitar work and knack for including uplifting vocalists and lyrics in his songs.

At the same time sad and hopeful, album1 is fueled by a nostalgic sound thanks to lyrics with reflective tones and melodic, progressive instrumentals that remind me of older bands like Explosions In The Sky. Alongside beautiful guitar riffs, San Holo showcases his love for deeper, sensual bass notes reminiscent of some of the more melodic trap songs released over the past few years. In fact, being the bass fiend that I am, the deep basslines are the lifeline that I use to traverse the dreamy soundscapes that album1 has to offer. Certain songs — like one of my favorites, ‘love (whip)’ — successfully reflect the emotional energy San Holo is desperately trying to conjure out of low-tempo breakdowns and expert synth work.

My favorite song on the album has to be ‘surface’, which I believe best encapsulates the theme of uplifting lyrics and progressive melodies. ‘Surface’ features the guitarist from the band Caspian which creates instrumental music similar to the aforementioned Explosions In The Sky. The song gradually lifts you with angelic vocals before crescendoing into high-pitched, atmospheric synths and eventually drops into a slowed down, bass-filled conclusion. This same formula seems to be how the album in general progresses.

If you enjoy the content, help keep this blog alive by donating below!