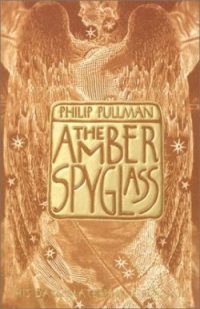 This book is appropriately the thickest in the series. Philip Pullman coherently ties together a fully-realized, unique and complex world that kept me engaged for the entire ride. Pullman’s world in His Dark Materials is a creative fusion of science (namely quantum mechanics), religion, and fantasy. The complexity only increases throughout The Amber Spyglass.

As I mentioned in my review of The Golden Compass, it’s hard to imagine children reading this book and actually understanding some of the more abstract concepts introduced. When thinking back on the first book and how digestible it was, I can actually imagine that many young readers would’ve stopped there. That may also be why the first attempt at adapting it into a movie only included the first book because that one hadn’t yet expanded the scope into parallel worlds. There was also the controversy over the anti-religion commentary. At first glance, it’s easy to see how people would’ve been offended by the material given the fact that the evil entity in the story was the Church and “The Authority.” But what I found was that Pullman was subtly offering a spiritual school of thought that was much more profound and all-encompassing than the narrow framework most traditional religions have to offer. Furthermore, the coming-of-age theme that plays out to the end of this trilogy might not be deemed kid-friendly to many parents.

One of my favorite things about The Amber Spyglass was the addition of short segments of poems that appeared at the beginning of every chapter. Many of the poems were from writers like Emily Dickinson, John Milton, and William Blake. There were even a few bible verses as well. John Milton’s writings were the ones that really caught my attention, however. Later I learned that these were taken from sections of his famous work, Paradise Lost. Understanding the influence that Milton’s work had on His Dark Materials helped me to see the magnitude of what Pullman was trying to deliver. Milton essentially repackaged biblical mythology into something more epic, and Pullman came around in the 20th century and took it more than a few steps further. I’m now convinced that, if all written texts were to be lost to the world except for this one, then future civilizations could use His Dark Materials as the basis for the continuation of biblical mythology.

Despite the overwhelming praise that I have for this book and series as a whole, there were just a couple of things that annoyed me. For one (and maybe this is due to modern progressive thought) the kind of backseat role that Lyra slowly assumed as Will came into the picture was a little irksome. In The Golden Compass, we’re introduced to a headstrong, boisterous young girl who takes control of situations. Over time, Lyra becomes more subdued and lady-like, with several scenes where she can do nothing but cry, which contrasts with the tomboyish antics of her younger self. And the boy Will suddenly seems in charge of most situations. Again, my slight annoyance at this may be due to a misunderstanding of the character that Pullman created, or it might have something to do with the proliferation of very strong female leads in more recent works of art (see: Katniss in The Hunger Games).

Moreover, even though I keep mentioning my surprise in this being digestible by kids, there were too many times where the writing style actually did reveal itself to be too kid-friendly for my personal tastes. Nothing inherently wrong with that since this is marketed as a children’s book, after all.

Overall, my third readthrough of this series re-established my love for it and revealed new tidbits that I didn’t pick up when I read it through middle and high school. The Amber Spyglass was a powerful conclusion to a well-thought-out story, and I’m excited to see how well the new TV Show honored it!

3 thoughts on “Book Review – The Amber Spyglass (His Dark Materials, #3) by Philip Pullman”