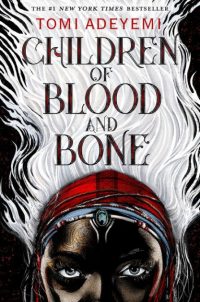 First off I have to say, it was so refreshing to read a book in this genre with characters that were all people of color. As a person of color myself, it was immediately validating to have people who look like me described within such a badass fantasy world doing such badass things. I noticed how Tomi Adeyemi emphasized the dark complexion of her characters’ skin too with positive adjectives rather than passive description, which was probably meant to abate the colorism inherent in the real world. There was also the fact that colorism was an actual theme woven into the story itself.

Adeyemi draws heavily from African mythology in Children of Blood and Bone. That’s another thing that I’ve never seen within this genre, which makes this particular series super unique in my eyes. I am of Nigerian descent and found a connection with the ancient West African culture imbued throughout.

Although I’ll admit that having not read many books by black authors is partly my fault (still procrastinating on Octavia E. Butler), it’s also quite obvious that there’s been a lack of representation within the sci-fi/fantasy genres for a while now, and these are the genres that I primarily read.

All of that combined made this a very special read for me.

So now that I got that out of my system…

Children of Blood and Bone wasn’t the greatest thing I’ve ever read recently but it was a super fun ride. The pacing was a little too quick at times, leaving me feeling like characters practically teleported to new settings. Also, I wasn’t used to the storyline being so linear, which made the world of Children of Blood and Bone feel very small. That might just be due to the YA nature of the book though.

While many books I’ve read as of late evoke cinematic imagery in my mind, Children of Blood and Bone read more like an anime or a video game to me, which isn’t necessarily a bad thing. Magic use felt like there were no bounds or rules and I had to continually suspend disbelief at the overly fantastical elements to truly accept what I was reading. Still, the magic use was my favorite part of the book. I just loved how gradually we were introduced to the varieties of magic in this world and still didn’t even get to see the full extent of it all. Occasional moments of powerful magical outbursts were highlights in the narrative. And the characteristics of each diverse magical clan made for a vibrant read.

My favorite character was definitely Inan. He had this whole Kylo Ren-esque emotional instability going on where he was constantly teetering between good and evil. A true wild card in the book, and somewhat relatable. His ability as a Connector was one of the coolest out of the ten schools of magic too, in my opinion. Adeyemi also did a great job of creating convincing characters whose perspectives were told in the first person. I had little problem switching between characters and truly understanding whose perspective I was reading in each chapter. There were a few times where I blurred Amari and Zelie, but I was quick to correct myself. That being said, it sometimes seemed like a few character actions were a tad unrealistic in certain situations.

Even though the pacing and character behavior could’ve been better, Tomi Adeyemi set up a refreshing and thrilling new literary universe that I’m happy to now be a part of. Its inclusion of an entirely dark-skinned “cast” is hugely important in a time where there is little representation in the sci-fi/fantasy genres. Adeyemi’s depiction of magic was vibrant and exhilarating, and I can’t wait to jump into Children of Virtue and Vengeance.

If you enjoy the content, help keep this blog alive by donating below!