With sadness and reluctance, Madison and I began planning for the final two-week leg of our journey through Southeast Asia. From the northern Thai city of Chiang Mai, it was time to head south to decompress near the crystal clear waters and limestone cliffs of the Thai Islands. The itinerary consisted of flying to the coastal city of Ao Nang which would act as our home base for a week as we went island hopping each day to a few of the dozens of islands further out to sea. For our final week, we’d then take a speedboat 60km further out to sea to a small island near Malaysia called Koh Lipe, a.k.a. “the Maldives of Thailand”. My goal for this part of the trip was to try to be as present and carefree as possible. I wouldn’t say that the Thai Islands were uneventful, but we were definitely not as active as we were in previous cities. That being said, this post will probably be brief.

As mentioned before, we left Chiang Mai in northern Thailand and headed south via plane to the coastal cities along the Andaman Sea. We actually landed in Krabi but chose a hotel further southwest in a smaller coastal city called Ao Nang. The city was positioned around massive limestone cliffs covered in green tree growth which really drove home the characteristic tropical feels of the place. Even better, our hotel room afforded us a clear view of these cliffs as well as a nice chunk of beach and sea.

Sunsets here filled me with gratitude.

Each day we were in Ao Nang we would head to the beach and book a longboat ride out to one of the many islands a few kilometers out in the Andaman Sea.

The islands we visited were Poda Island, Chicken Island, Tub Island, and Hong Island, but this was only a handful of the numerous islands we could’ve visited. So many islands, so little time. Island trips consisted of exploration, sunbathing, snorkeling, and pretty much just floating in warm, crystal clear water for hours. Coral is very common in the Thai Islands and that paired with the clear water allowed us to see the wonderful ecosystem we were swimming in. Many types of fish would be swimming right there next to us, seemingly unafraid of human presence. 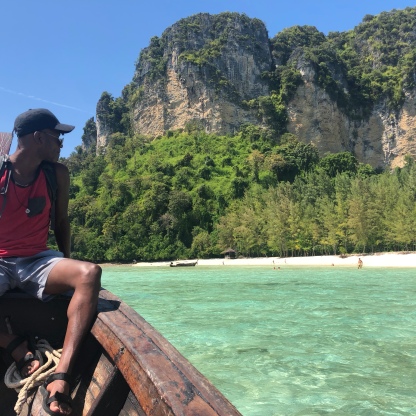 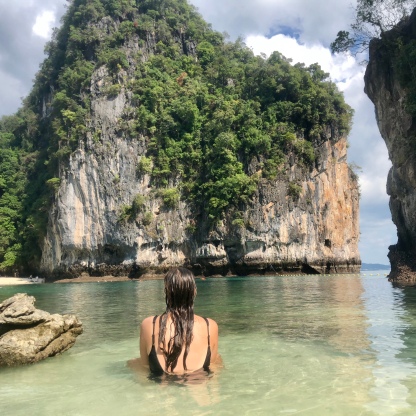 Soon our week in Ao Nang would come to an end, but that meant it was time to head 60km out to sea to our new island home of Koh Lipe.

When planning these final two weeks, the last thing we thought we’d be doing was heading out to this tiny island for a week. Initially, we had planned to spend our final week in Koh Lanta which is another coastal city on the Thai mainland further southeast from Ao Nang. But after doing some research we kept reading about this island that people constantly referred to as “the Maldives of Thailand”; we couldn’t resist.

Koh Lipe is 2km long and 1km wide. You can walk the entire island in about an hour. It has exactly four aptly named beaches: Sunrise beach to the east, Sunset beach to the west, Karma beach to the north, and Pattaya beach to the south. Pattaya beach is where our speedboat dropped us off when we arrived. We chose to stay at a hostel this time around since it was either that or one of the really expensive beach resorts on the island.

Island life was leisurely and slow, just how we wanted it. One of Koh Lipe’s appeals is that it’s quiet compared to the islands closer to the mainland which tend to attract large amounts of tourists. 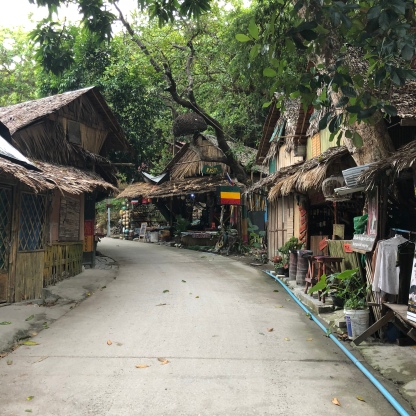 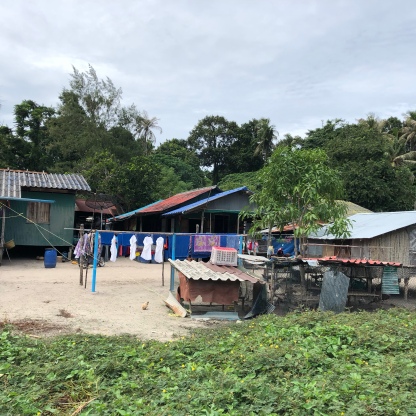 Our days were spent hanging out in a somewhat secluded section of Karma beach where we had a perfect little swimming hole all to ourselves. Similar to the view I described in my post about Sa Pa, Vietnam, the scene at Karma beach reminded us of some of the high-def wallpapers preloaded on computers. 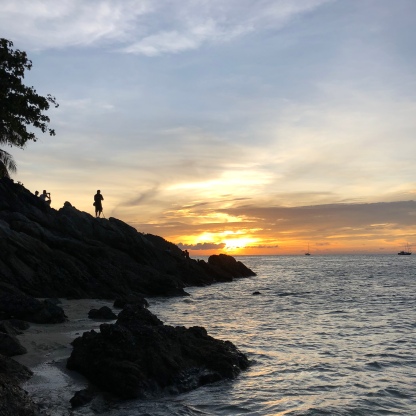 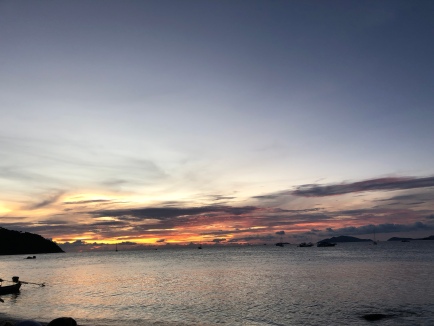 Aside from the beaches, Koh Lipe also had a plethora of tasty (but expensive) restaurants and bars. Most of these establishments were on Koh Lipe’s very own Walking Street. Along Pattaya beach, there were also several places open late, including a full-on nightclub called Art Beach Club, complete with its own pool and live DJ’s every night. Walking Pattaya beach at night you can also watch outdoor movies or watch fire dancers perform.

Also at night on any of the beaches, you can see bioluminescent plankton, something I didn’t think I’d ever witness. Truth be told, we only saw a few specs of plankton here and there, it wasn’t like we were seeing larges masses of them floating on the shore like I’ve seen on the Internet. Still, it was super cool to see these blue glowing specs wash up on the beach.

When our week in paradise came to an end, we hopped on yet another speedboat and rode six hours back to the Thai mainland city of Phuket where we stayed two more nights. Phuket is a really popular destination for those heading to the Thai islands for the first time. Its nightlife is wild, to say the least. But after our two weeks in gorgeous Koh Lipe and Ao Nang with its nearby islands, we just couldn’t bring ourselves to enjoy Phuket for what it was. 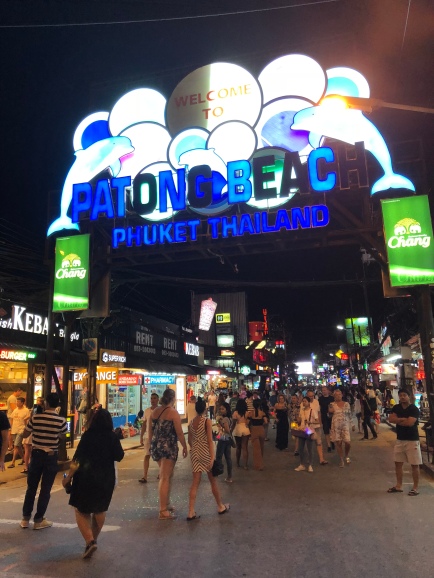 From Phuket, we embarked for one last night in Bangkok. Our journey came full circle as we revisited Khaosan road, stayed at the same hotel we did last time we were there, and ate at our favorite restaurant. The next afternoon, we hailed a taxi to the airport and said goodbye to SEA.

Humans perceive the passage of time subjectively and inconsistently. What at first seemed like a lifetime of travel awaiting our hungry souls now feels like the evanescent memory of a recent dream; a dream that played out in the blink of an eye. But when dwelling on some of the details of these memories, certain parts seem like they really did happen a lifetime ago. I now understand why some people choose to stay in SEA for such prolonged stretches of time. While I’m excited to compare what I’ve experienced on the other side of the world to how things are at home, I’m also already reflecting on the last two months with nostalgia. I know that this experience has changed me, and I definitely got what I wanted out of it, but the proverbial fruit has been bitten and I’m not sure I can go back to the way things were so easily. A part of me hopes that this fresh sense of wanderlust will never be satiated because it seems like the perfect way to evolve as a human.

As I’m writing this, we are actually on the 14-hour plane ride home to Portland, Oregon. To everyone who found the time to read all of these posts, thank you for indulging me and I hope that it has given you even the smallest hint of motivation to visit other parts of the world and encounter a culture much different than yours, or to at least take those small risks you’ve been hesitating to take. And who knows… if all goes well in the near future maybe I will have another travel series to write.