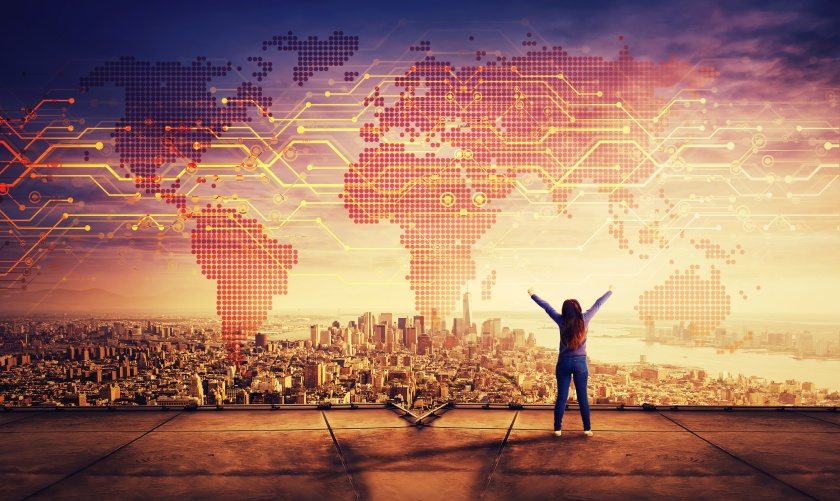 When the Internet was created near the end of the 20th century it was hard to imagine what it would evolve into. Today we have a global high-speed communications platform that mega-industries have been built on top of.

Two revolutions happening on the Internet now are digital nomad lifestyles and blockchains. And these two have more in common than you’d think.

Digital nomads are people who’ve become location-independent with their work and typically opt to live in foreign countries.

Likewise, cryptocurrencies built on top of blockchains are a form of digital money that can operate independently of traditional, centralized banking institutions.

It may not be obvious at first, but blockchains and digital nomads go hand-in-hand as incredibly important consequences of the internet-age. Here’s why.

What both digital nomads and blockchains represent most is freedom. Freedom is that elusive thing that everyone wants. Citizens of every country want to be a part of the free world. Everyone thinks they have some degree of freedom. Most are not really free but don’t know any better because of the pre-defined world they were born into.

Our idea of freedom changes relative to the era we live in, the country we live in, or the job we have. And technological innovations often set new baselines for what true freedom is.

For example, when the printing press and the television were invented, people believed that information was now in the hands of everyone. Unfortunately, what we see now is that a handful of media corporations control the flow of information through these avenues and push biased narratives.

Later we would invent the Internet, and then the smartphone. Now information is freer than we had previously thought possible, but we still have far to go.

Similarly, banking became a great way for the average citizen to store their capital and pull out loans which enabled large, wealth-building purchases such as real estate and new businesses.

However, it is now known that banking institutions are more predatory and profit-driven rather than neutral and altruistic. And fiat currencies are subject to catastrophic inflation.

But now we have cryptocurrencies. Built on top of decentralized digital ledgers called blockchains, cryptocurrencies allow for seamless peer-to-peer transactions without the need for middlemen, such as banks and national governments.

What’s more, decentralized finance (DeFi) has now developed to the point where anyone can lend or borrow money without having to jump through various hoops. Nothing else is needed but a little bit of capital.

Similar to the information freedom the Internet created, and the financial freedom that blockchain is creating, the digital nomad lifestyle is inherently one of physical freedom.

No longer confined to any one location, digital nomads can pick up and move at a whim. Depending on which country they choose, housing can be relatively cheap. They aren’t subject to crippling rent, car payments, utility bills, or any of the other costs associated with putting roots down in a given city.

Basically, they have the freedom to set the parameters of their lifestyle, choosing what sort of climate and culture they want to be in for a given amount of time.

Combined, cryptocurrencies and digital nomads are testaments to the freedoms afforded by the digital age. Eventually, people will have an even larger degree of freedom when cryptocurrencies are widely adopted.

Digital nomads will be able to easily swap between different digital currencies that best suit their location and needs; without the added fees or time for funds to settle in bank accounts. And they’ll be able to receive payment or remittance in the form of digital currencies from anyone around the world. Cryptocurrencies will create a freer market.

Blockchain is creeping into every industry, threatening to transform them from the ground up. One such industry ripe for blockchain adoption is the travel industry. Over the past few years, dozens of blockchain startups have sprung up with solutions to various problems with travel and tourism.

An example is Travala, a travel booking service that accepts cryptocurrencies as a valid form of payment. It is poised to be the go-to for travelers looking for alternative payment options.

Travala is an example of how cryptocurrencies will enable underprivileged people to do things they normally wouldn’t be able to. In this case, travel. As cryptocurrencies become more widely adopted, we may see a proliferation of people undergoing their travel dreams since they don’t require bank accounts.

Other blockchain services that are looking to disrupt travel are focusing more on the logistical side of things. Winding Tree, for example, is a business-to-business (B2B) blockchain company that wants to transparently link different sectors within the travel industry. This includes booking agents, hotels, and airlines.

Once these different travel sectors are linked they will be able to share information amongst one another and allow for better logistical and supply chain accuracy. For the traveler, this means no lost luggage, cheaper rates, and an all-around seamless travel experience.

Focusing again on the individual traveler, Cool Cousin is a blockchain app that will connect tourists with local tour guides. It’s a clear attempt at democratizing the tour guide service by creating an Uber-like effect (see: ride-sharing) in the sector.

For travelers, this means fewer hurdles, more transparency, and cheaper prices for premium tourist experiences. And for locals, this means a chance to capitalize on the tourism boom occurring around the world.

These are just a few examples of how blockchain and travel will further coexist in the future. The transparent, decentralized nature of blockchain will ease much of the strain of travel, while cryptocurrencies as alternative payment methods will enable more people to travel.

So how do digital nomads earn money while traveling? Thanks to the Internet, online jobs are pretty abundant. Everything from full-time remote work to situational “gig work” is up for grabs.

Freelance writing, graphic design, and software development are among the top jobs for digital nomads. But the current state of the Internet allows for so much more. Digital entrepreneurs are becoming more common, taking up roles as online content creators and influencers.

In blockchain specifically, there is ample opportunity for digital nomads to find work. Freelancing as a writer, graphic designer, or software developer is extremely lucrative at this point in time because the niche is not yet as over-saturated as others.

Additionally, cryptocurrency investors are finding success day-trading or swing-trading the thousands of coins on the market. Trading is a great way to earn a passive or full-time income if you’re willing to accept the risk.

Companies in the blockchain space that become well-established also look for traditional roles such as marketers, executives, and customer support representatives. While not all of these roles can be done remotely, the vast majority can, especially given the push toward remote work in the world of COVID-19.

Welcome to the new world

We are living in truly unprecedented times. The digital age has ushered in a rapid frequency of change unheard of in the decades before. In modern times we are grappling with new global-scale innovations and crises with each passing month.

While COVID-19 has shaken the global economy, it has also forced companies to adopt remote-working lifestyles for their employees. This will inspire even more people to become digital nomads.

Additionally, political unrest sparked by government corruption all over the world will promote the adoption of digital currencies that aren’t tied to these governments and their corporate allies.

Converging trends such as these are why blockchain and digital nomad lifestyles will define a new era of freedom, and we will see a new generation of global citizens.